The Illustrated History of Chess 1 – Origin and Early Times

I still remember that the first time I played chess with my father, he told me the famous legend about the origins of chess. The tale was about an Indian wise man, who, after showing his new game to the Emperor was granted a single wish. What he wished for, was quite interesting. A single grain of wheat on the first square of the board, two on the second, four on the third, and so on, with each square having two times as many grains of wheat as the previous one. Of course, as those familiar with this Math problem already know, the Emperor could not follow through on his promise. There simply wasn’t that much wheat in the world.

The tale doesn’t say what happened to the wise man, some say he became Emperor, while some say he was punished for his trickery. To me as a kid, this whole story was fishy. So i thought to myself, if I get to teach children about chess, maybe – for those who are interested – I should find out what exactly are the origins of chess. What I have discovered, was far bigger than I have expected, with many contradictions. From all the possibilites, the most popular one – and the one I believe in – is what I will write about.

Perhaps it is not surprising that people liked playing even in ancient times. The supposedly oldest board game is the African Mancala, whose simple rules are known for us but whose origin is lost in the mists of time. However, it was only similar to chess in that it was highly entertaining and played on a board.

Archaeological findings from Egypt prove that there were more complex board games even as early as 3500 BC. One of these, Senet, was more like chess, because two players played it on a squared board but they still threw dice to play it. Senet must have been a really popular game, since 120 different boards can be seen in museums nowadays. A similar board was found in the Sumer city of Ur but discs were used to play it. There were symbols on the boards of both games but it is a pity that we do not know the rules of any of the games, we can just guess about them. 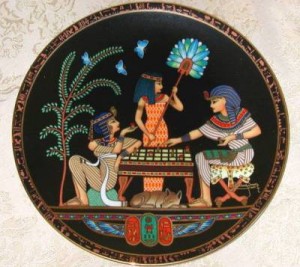 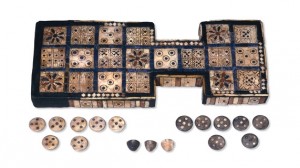 Further exciting findings were discovered from the Indus Valley Civilization, which existed in the territory of the present day Pakistan and Northern India during the Bronze Age, from 3300 BC. The new feature is that we can find different pieces on the board, which could even be of a 10*10 square shape.

Based on the findings we may presume that chess developed from the early board games during several thousands of years while certain versions wandered back and forth through trade from Persia as far as India and even China.  Perhaps, that is why several legends existed in the past and there are still a number of differing scientific explanations as to where today’s chess started out on her world-conquering way but we are of the opinion that it cannot be determined clearly. 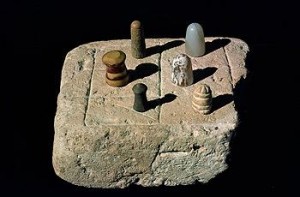 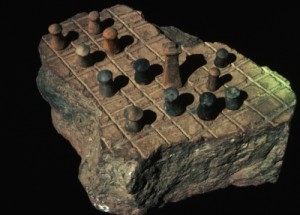 Based on the available written records, the Indian Chaturanga and the Persian Chatrang, documented approximately at the same time as the former one, may be presumed to be the forerunner of chess, as well as some other chess-like games, such as the  Chinese Shiang-Chi, the Japanese Shogi, the Thai Makruk and the Korean Changgi. Chaturanga in Sanskrit means four parts. In India, an army platoon had four parts – elephants, chariots, soldiers on horseback, and foot-soldiers. You would be wrong to think that the Persians had no elephants, at all. Accounts of battles reveal it for us that the Greeks suffered a lot from them even in times before Christ. 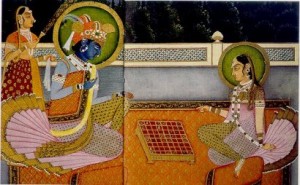 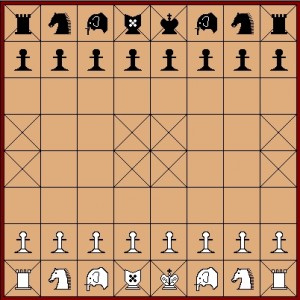 The first written reference to Chaturanga can be found in India in a romantic story written in 600 AD. It is obvious from the early paintings that two players played the game (which also had a version for 4 players) on a single colored, 8*8 squared board called Ashtpada. Crosses, which could be quite disturbing, can be seen at several places on the board but according to the known rules these could not have been dedicated squares; it is rather likely that they were used for a race game played on the same board.

We can only find the exact rules of Chaturanga in a description from 1200 AD: the aim was to capture the king; there was a short-reaching elephant in the starting position instead of the Bishop we are used to nowadays and the Queen was not either the most beautiful or powerful piece, just a sluggish royal advisor, a kind of minister. Pawns could only move one square ahead from their basic position, however, the Knight and the Rook moved exactly like today. The kings were not necessarily positioned on the same file and there were several slightly different rules, but one thing is certain: the game went on much more monotonously and slowly than today. 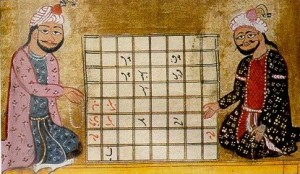 The game was called Chatrang with practically the same rules as its Indian counterpart in the Persian civilization which originated also in the Bronze Age. The first written records also date back around 600 AD, although they praise the chess abilities of a ruler living 400 years before. The first known chess pieces dating back to the 6th – 7th centuries were also found there. The King was called Shah, like in the Indian version, and if the King had no legal move any more then the expression used was ’Shah mat!’ (The king is dead)! Does it ring a bell?

In 644 AD the Muslim troops defeated and conquered Persia, where chess had become part of the education of the nobility by then. No wonder they also took a liking to this war game, so learnt it quickly and at a high level. Although they gradually changed its name to Shatranj due to pronunciation causes, they largely took over the names of the pieces, which spread all over the Arab world. Since then very many descriptions were made about chess, including the earliest complete description of the rules, as well as the first know extant problem. They must have mastered the game, really, because the solution was mate in nine moves. We can just wonder how successfully we could play against them today…

Muslims did not stop at Asia, of course. In the course of their conquests, chess luckily reached the western world through Byzantium, Sicily and Southern Spain in the 8th century, about which you can read in the following part.